Packaging Gooey as a Distributable Application

Edit: 2019-09-22: Gooey's packaging story has advanced! You can find up to date cross-platform guides in the official Gooey docs!

For packaging, Gooey supports two options: CxFreeze , and PyInstaller.  We're going to focus on PyInstaller as it's my preferred wrapper due to its ability to make end user friendly single file executables on Windows, OSX, and Linux. Meaning, this: 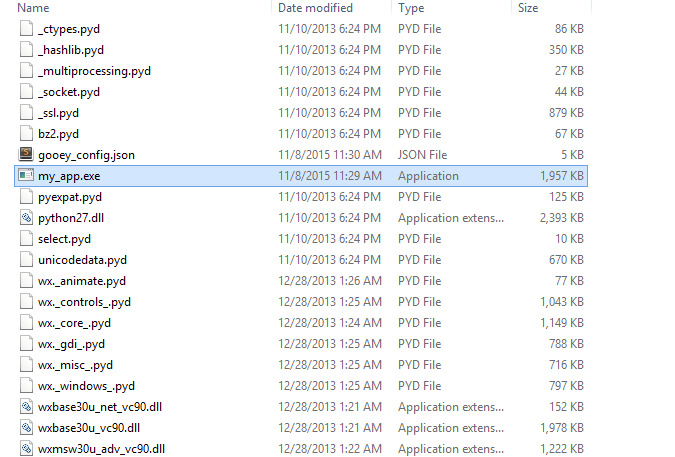 If you don't already have it, download the latest PyInstaller version and install it via setuptools.

Step 1: Preparing your script for packaging.

By default, the python interpreter buffers stdout. In short, this means that rather than Gooey being able to read the output of your program in real time, it receives it in very coarsely grained chunks.

Normally, passing the -u flag to the Python interpreter would be enough to prevent stdout buffering. However, due to an apparent quirk in PyInstaller, it seems that the -u flag never makes its way up to the interpreter, and thus the output is still highly buffered. Luckily, getting around this pretty easy.

Add these two lines to your source anywhere before your main() (or equivalent) method.

This will reopen Python's stdout in write mode with buffer size of 0 ( which forces it to constantly flush). This let's Gooey read from your program in realtime as it's generating output.

PyInstaller uses spec files to determine how to bundle the project. These provide a list of directives on how to build the package, setup hooks to run, and resources to include.

You can download a pre-built spec file here, or create a file called build.spec in the directory of your project and paste the following:

For the most part, this is the default spec file which PyInstaller generates. However, there are a few modification to instruct PyInstaller to pull in all of the non-code resources used by Gooey. Credit goes to roshgar for figuring this all out!

With this spec, you'll just need to make two changes:

The final step is to feed the spec file to PyInstaller and let it do its magic.

PyInstaller will stick your packaged executable in a directory called dist. Open that up and you'll find your shiney new app all ready to distribute.